Finding True Blessings on the Other Side of Suffering

Mourning is an inevitable part of life. Whether young, old, rich or poor, none of us can escape the pain of suffering and loss.

Jesus himself, the "man of sorrows," was grieved by many things on earth. In his Sermon on the Mount (Matt. 5-7), he challenged our notions of grief. Not only is mourning to be expected, but as believers, when we mourn we are blessed.

That can be tough to accept. When we're mourning the loss of a loved one, or grieving our own sinfulness, or suffering deeply for the sake of God's kingdom, it’s hard to see past our pain. Sometimes we need an example of someone who, as Isaiah prophesied about Jesus, moved past suffering to “see the light of life and be satisfied” (Isa. 53:11).

Pastor Bennett Marona has had countless reasons to mourn. As a South Sudanese man working in ministry, he knows what it means to persevere through trials and suffering. 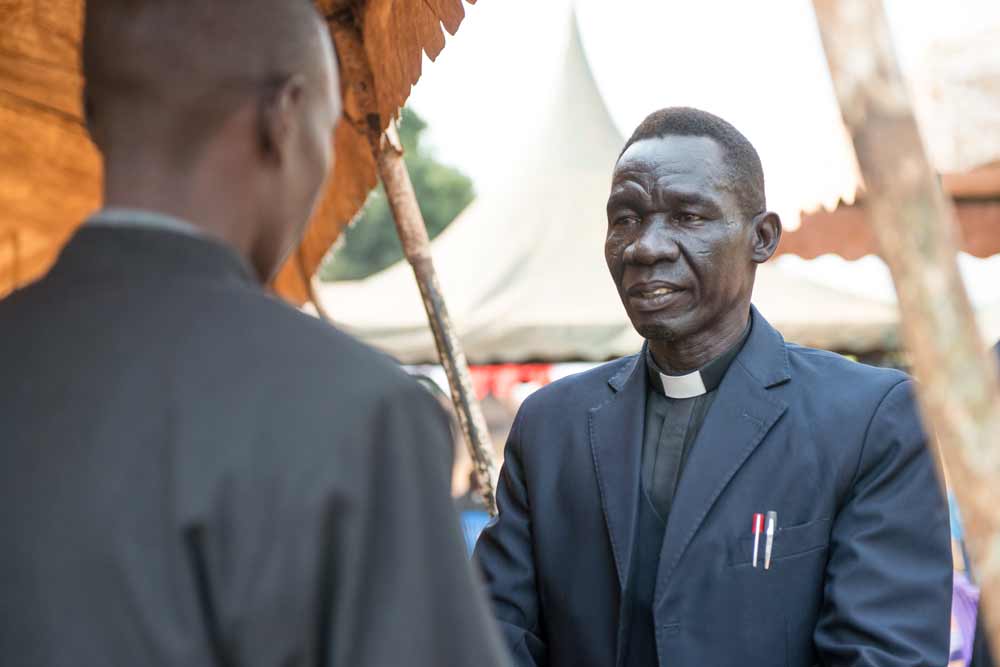 “I was almost killed, but God saved my life,” he said. “I think it was God’s plan, not just that I remain alive, but that I complete this huge work that he set in front of me. Our people have been longing to see the Word of God in our language. We went through a lot of different challenges.”

As the world’s youngest country, South Sudan had a tumultuous start. It was born in 2011 out of one of the longest civil wars in recorded history. And as of 2017 it ranks highest on the Fragile States Index, meaning it is more vulnerable to conflict or collapse than any other state in the United Nations.

This is where Pastor Bennett calls home. 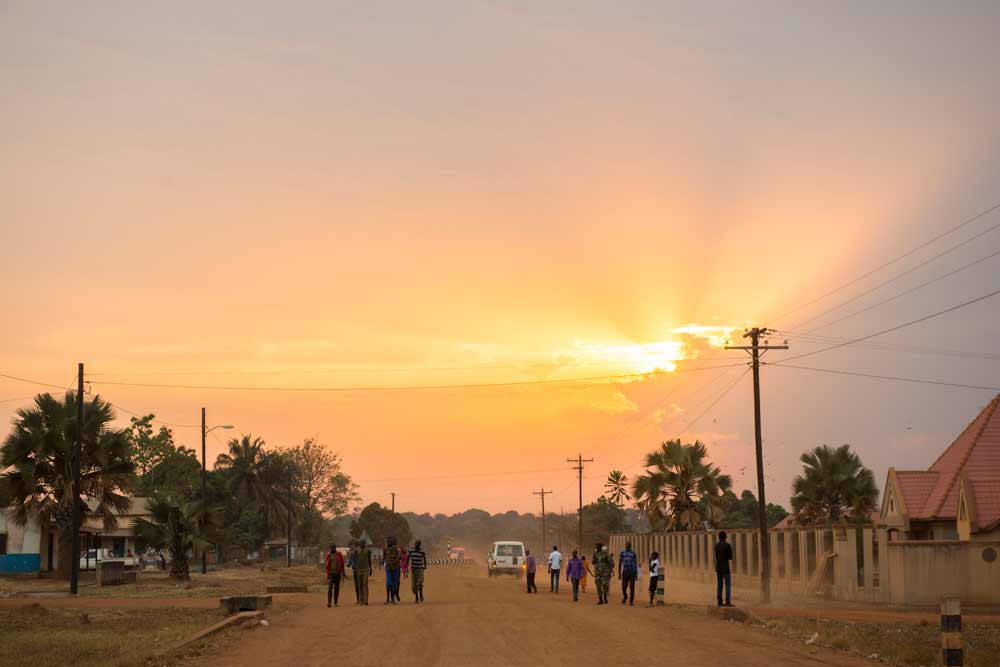 Bennett speaks Baka, a minority language used by about 26,000 people. He got started in Bible translation in 1992, the same year Wycliffe linguists Doug and Anne Sampson joined the Baka New Testament translation project.

Your prayers can help communities translate God's Word in their language.

The Baka project had actually begun years earlier with Wycliffe missionaries Kirk and Carla Parker doing literacy and translation work. (Previously Baka had never been written.) But the project stalled due to increasing instability caused by Sudan’s second civil war. The Parkers returned home, and thousands of Sudanese, including Bennett’s family and the Baka community, were forced to evacuate to the Democratic Republic of the Congo (DRC, then called Zaire).

Bennett remembers hastily gathering his family and fleeing into the bush with just the clothing they were wearing.

“My family and I, we walked for seven days, walking day and night, day and night,” he said. “There was no food; many children died on the way because of thirst and hunger.” 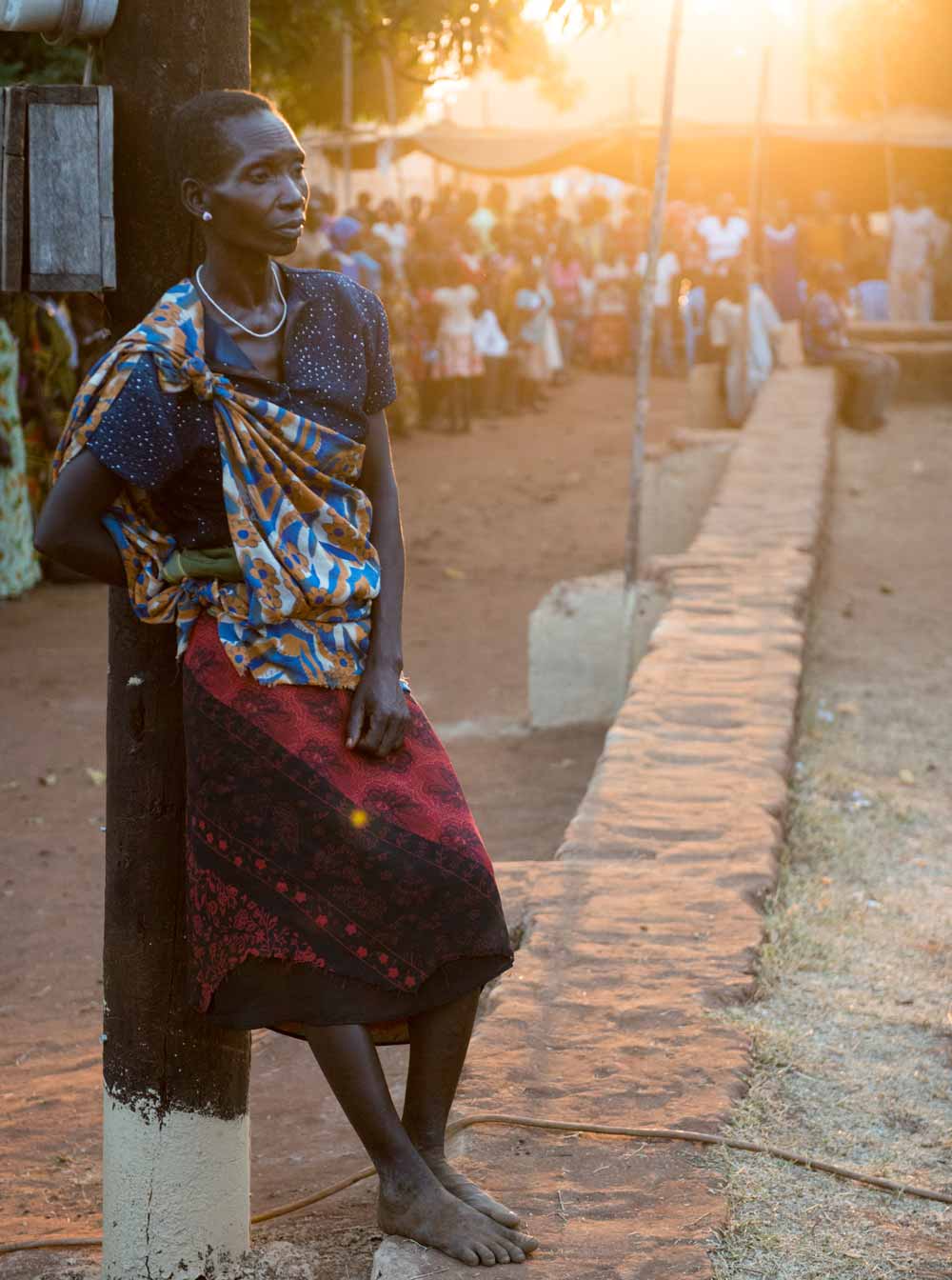 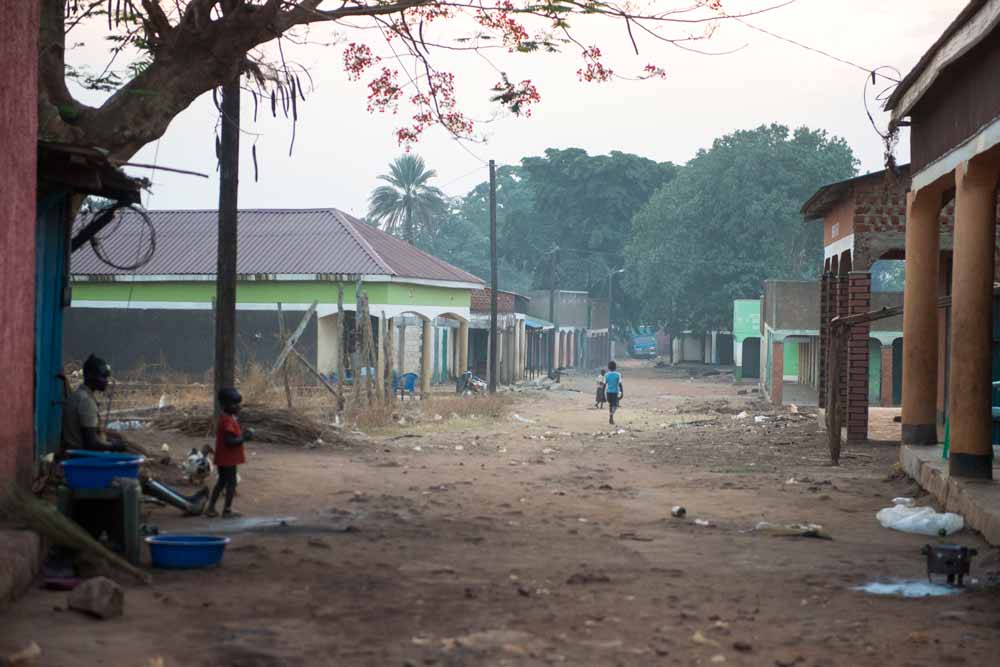 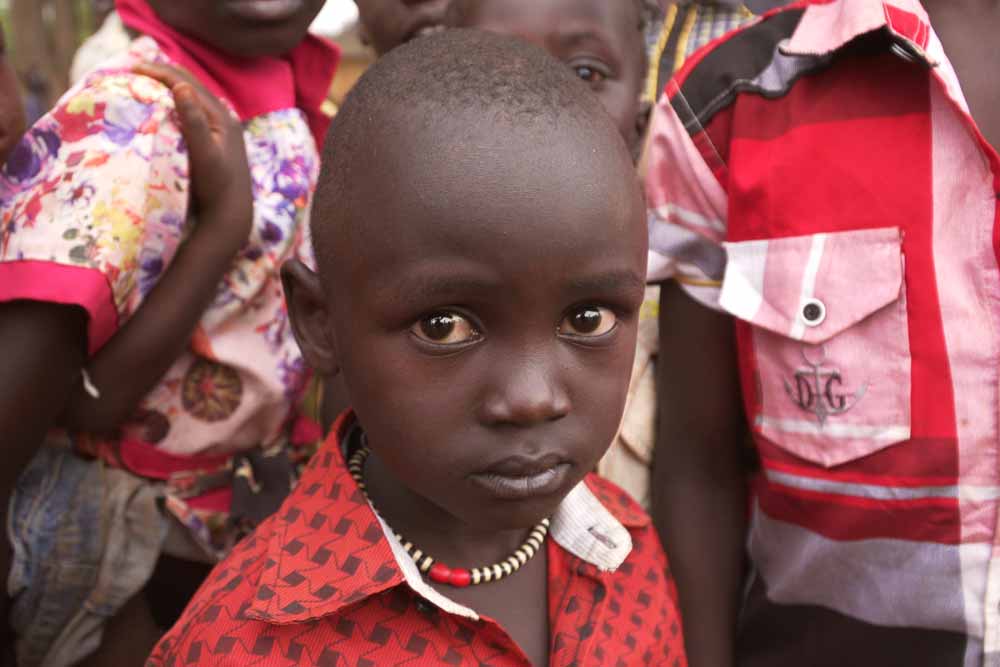 Then one night about halfway to the DRC, while they were sleeping hidden in the bush, they heard gunshots. The crowds leapt up and ran, but Bennett heard a voice speak directly to him, telling him to take a different route. Later he learned that hundreds of those who’d gone the opposite way had run directly into the ambush and been killed.

Again and again, God led Bennett through the rest of the journey this way. “Whatever direction I thought of going, we’d go there safely,” he said.

His family eventually settled into a refugee camp about eight miles outside the town of Dungu, in DRC, where the Sampsons were living. Bennett stayed in a small house in town to work on literacy and the Baka New Testament translation with Doug. 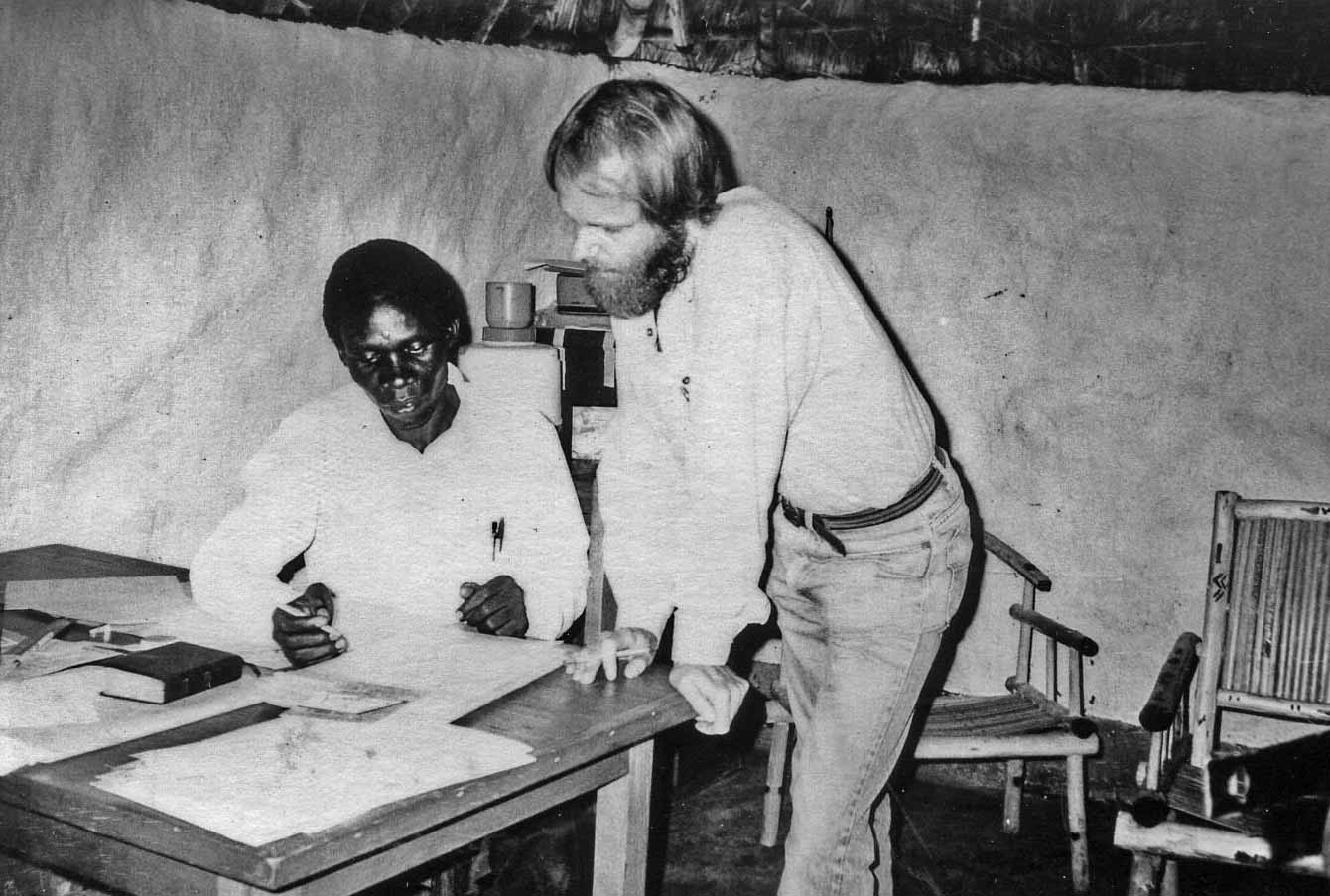 Before long the soldiers based in Dungu were becoming angry because they hadn’t been paid in several months. They decided to loot the town, and started shooting in the market near the translation office.

Bennett and Doug ran back to meet Anne at the Sampsons’ home. They just managed to hide the translation work and equipment through a loose panel in their ceiling before the soldiers arrived at their door. The soldiers shot a hole through the roof of their veranda, demanding that the Sampsons “open up, or else.”

When the Sampsons opened the door, the soldiers and dozens of locals ran inside and looted the home, carrying off everything of value they could find.

“When the shooting started, Pastor Bennett and some other guys, without even thinking, grabbed their bows and arrows and came running to our compound to protect us,” Anne said. “They were willing to risk their lives for us. That really touched us.” 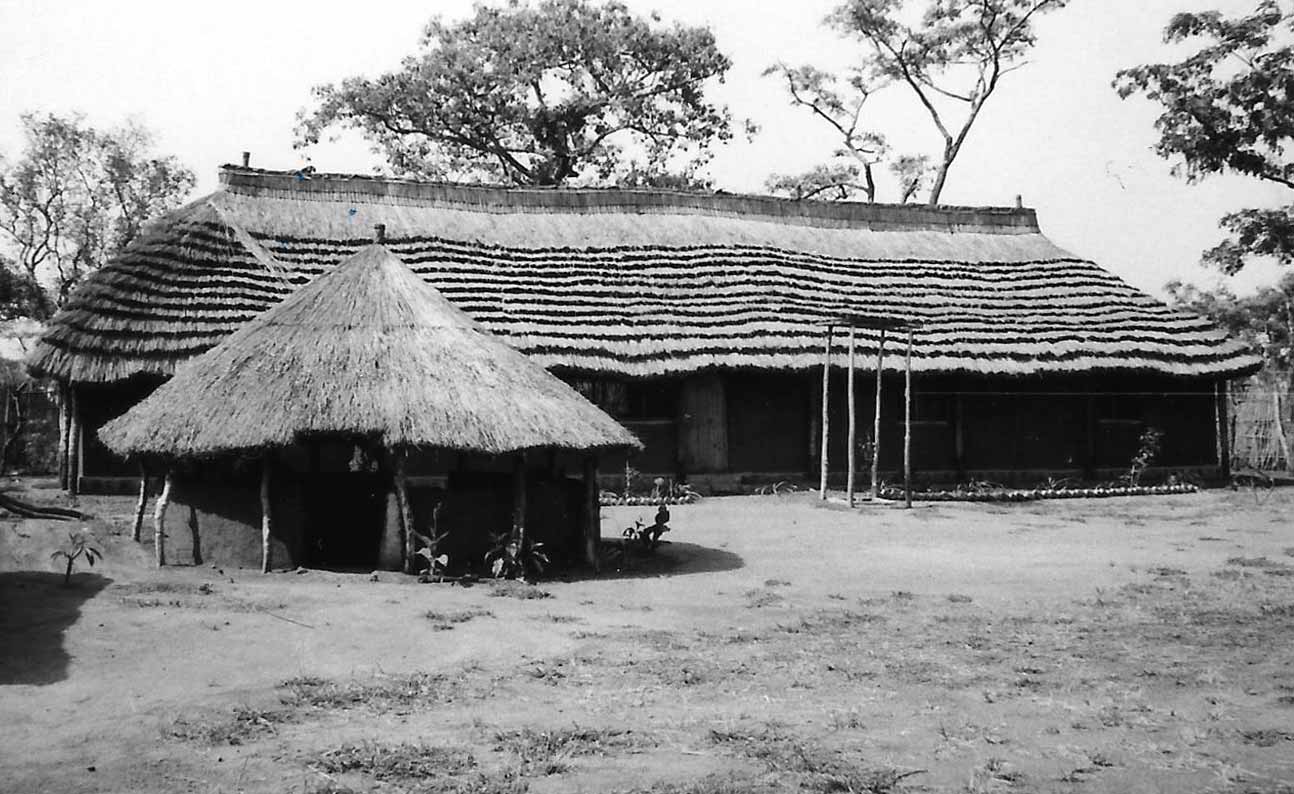 Protected for a Purpose

At one point when the war made it impossible for the the Sampsons to remain in the refugee camp, Bennett and a fellow Baka rode bicycles for two hundred miles to meet with them at a safer location in Uganda.

Then one day armed soldiers kidnapped Bennett from the translation office in DRC. He was one of nine held captive. One by one, each night the soldiers killed one of the prisoners with machetes.

“It was a terrible kind of killing that I witnessed,” Bennett said. “A person was tied, both legs and hands, and laid down. You could hear a human being screaming at the top of their voice, until … ”

For eight nights in a row, Bennett witnessed this brutality and awaited his own fate, until he was the only prisoner left.

At midnight, they came for him.

“One of the soldiers said, ‘Pastor, come. The commanders are calling you,’” Bennett remembers. “I thought, ‘They’re going to kill me … just like they killed the others.’” But with no explanation, the soldiers let him go.

“It’s hard for me to know why I was not killed,” he said. “Truly, God chose me to be a translator. Bringing the Word of God to my people is more important to me than all other things. I want them to hear God’s voice with their own ears. All the time I prayed, ‘God, speed this work so that they have a Bible and read your words, so that they go to heaven when the time comes for them.’” 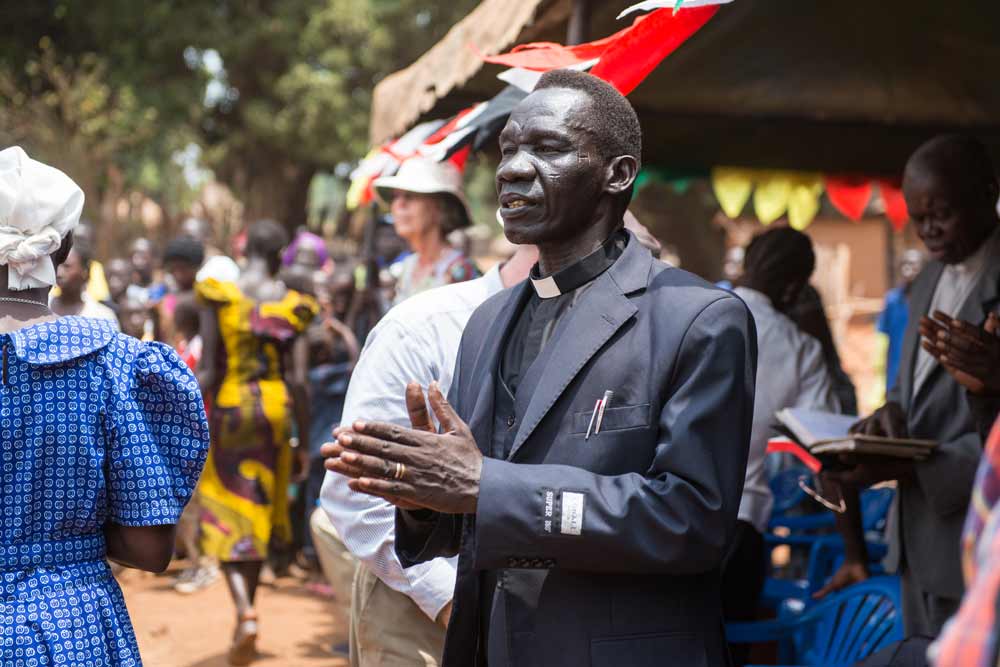 Facing trial after trial, Bennett demonstrated his commitment to the task God called him to complete, his dedication to the Sampsons, and his willingness to sacrifice his life for their shared mission.

Finally, in March 2017, Bennett’s prayer for the Bakas was answered. After more than 30 years of perseverance, thousands of Baka speakers came together to dance, sing and experience the Word of God in their language at the Baka New Testament dedication.

“Now that the whole New Testament is out, thousands of Bakas are going to say, ‘Hallelujah! Praise the Lord!’” he said. “I see every Baka community member as my biological child. I love them.” 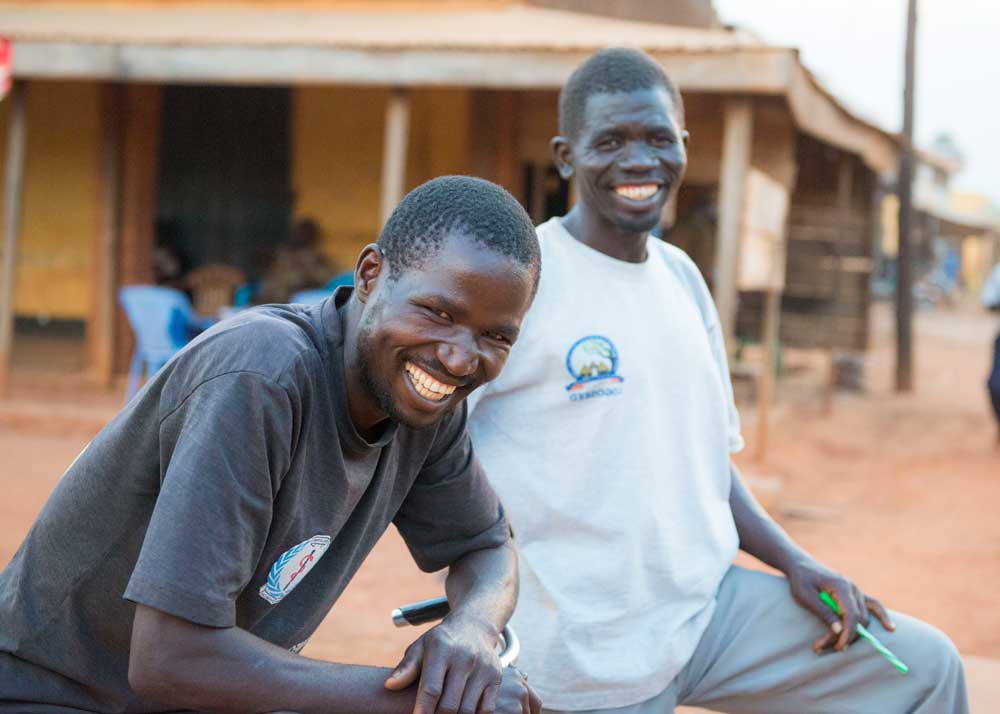 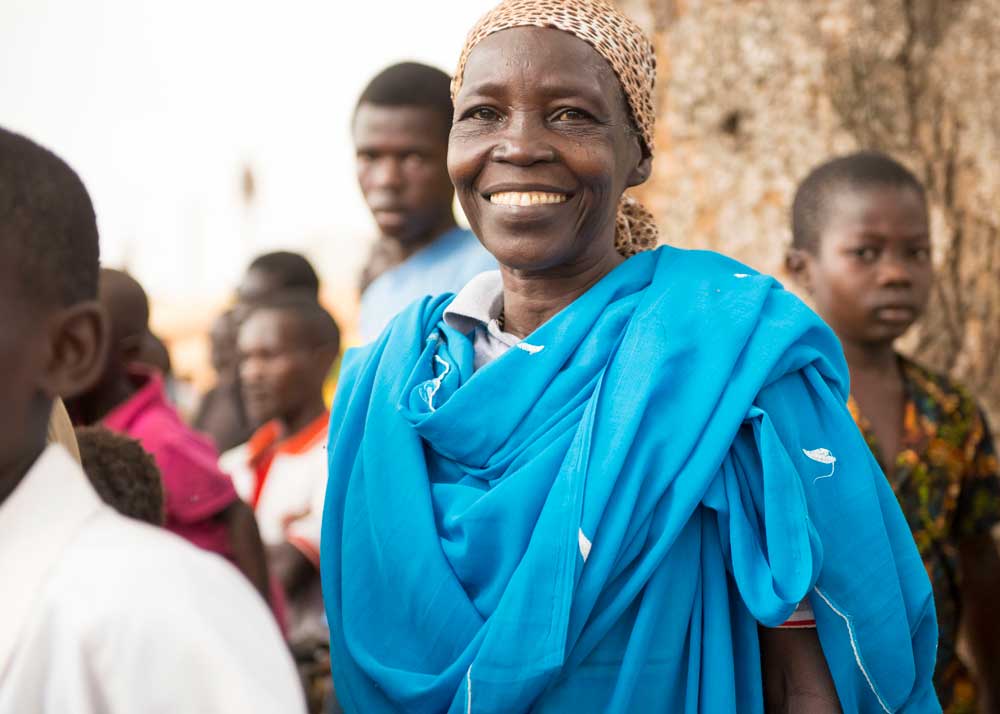 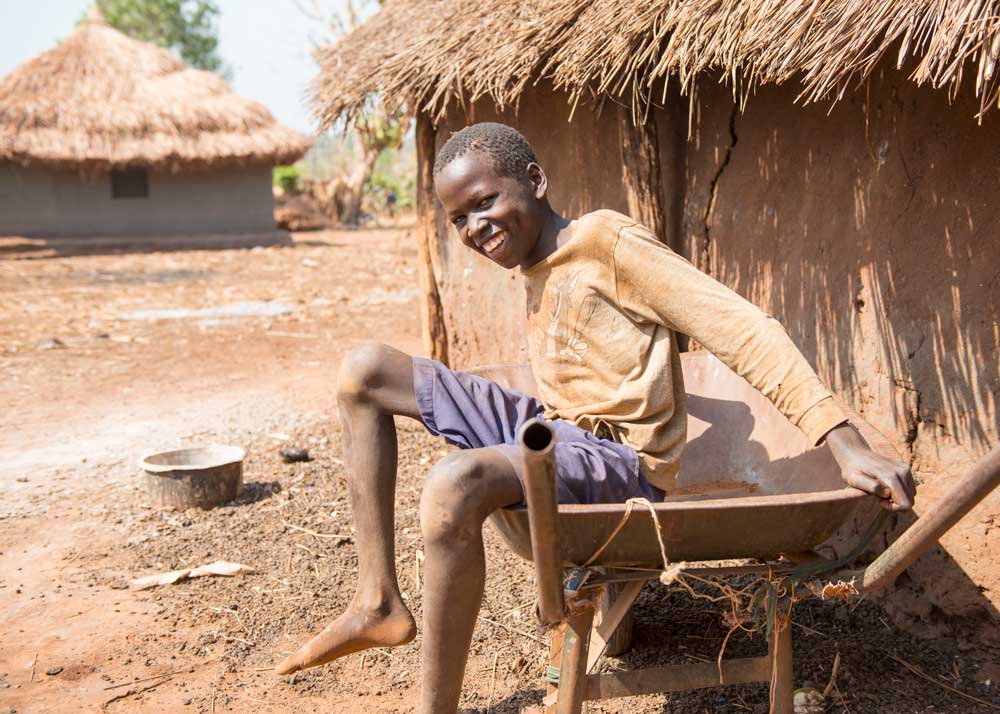 His favorite part of the day was when the boxes of New Testaments were opened, and hundreds of his fellow Bakas rushed forward to get their copies. 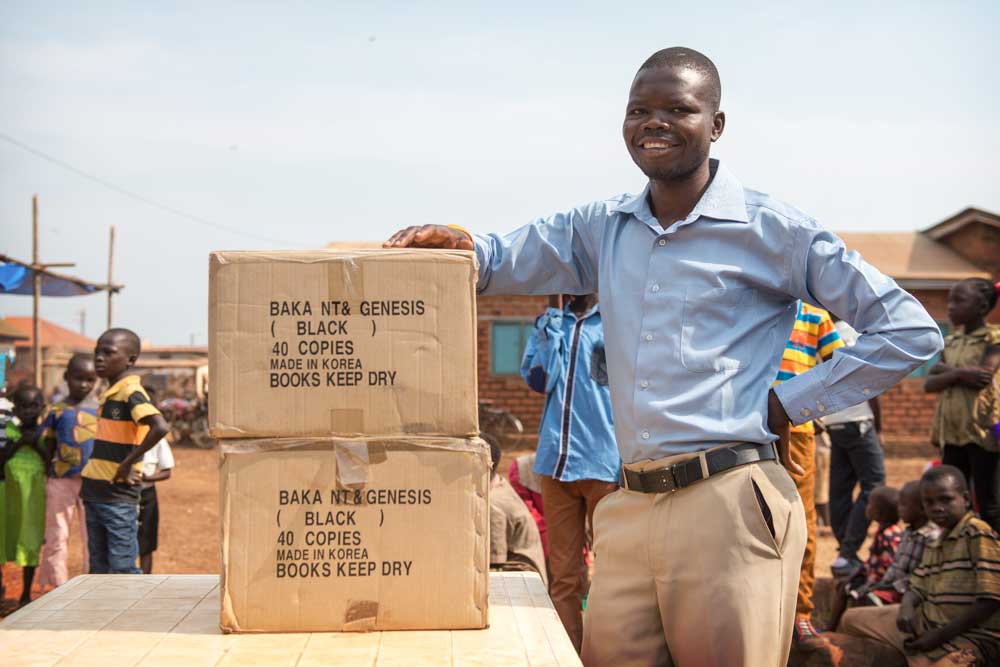 “At that time, I forgot all the challenges I went through.”

Would you say that Bennett is blessed? He and the Baka community have certainly done more than their fair share of mourning: seeing friends, family and innocent children hurt and killed; being forced to evacuate from one country to the next; losing every worldly possession in the process.

On top of enduring hardships that come from being part of a minority people group in times of war, Bennett also risked his life repeatedly for God’s kingdom work. His role in Bible translation with western missionaries made him a greater target in a dangerous climate. But he stayed.

Though he has experienced mourning, today he and the Bakas experience God’s comfort through the Scriptures in their language. 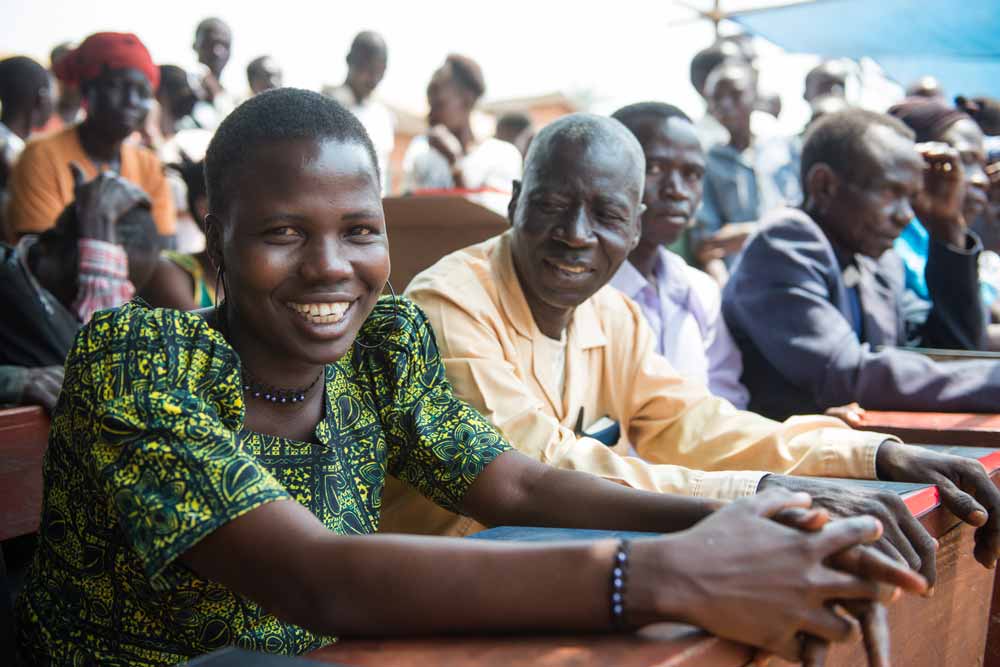 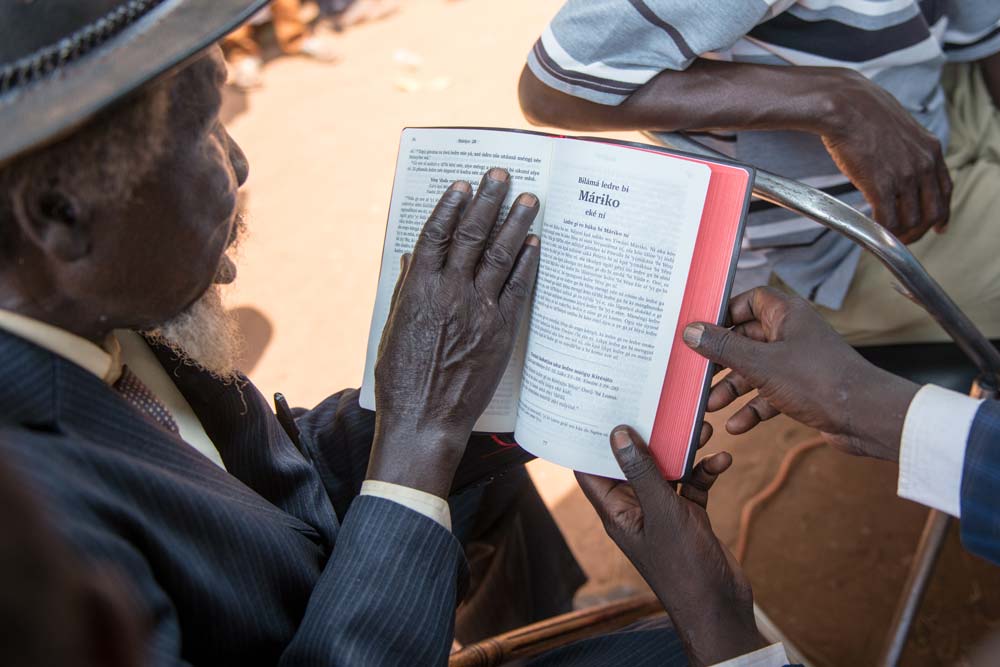 God’s Word tells us to count it joy when you face trials, because this produces steadfastness (James 1:2). Bennett’s relationship with the Lord is deeper because he has remained steadfast in Bible translation. "Whenever I sit at the desk to do translation, it's like I'm sitting with God at the same desk; we are facing one another," he said. "There's really no benefit like what I get from translation."

Your prayers can help communities translate God's Word in their language. 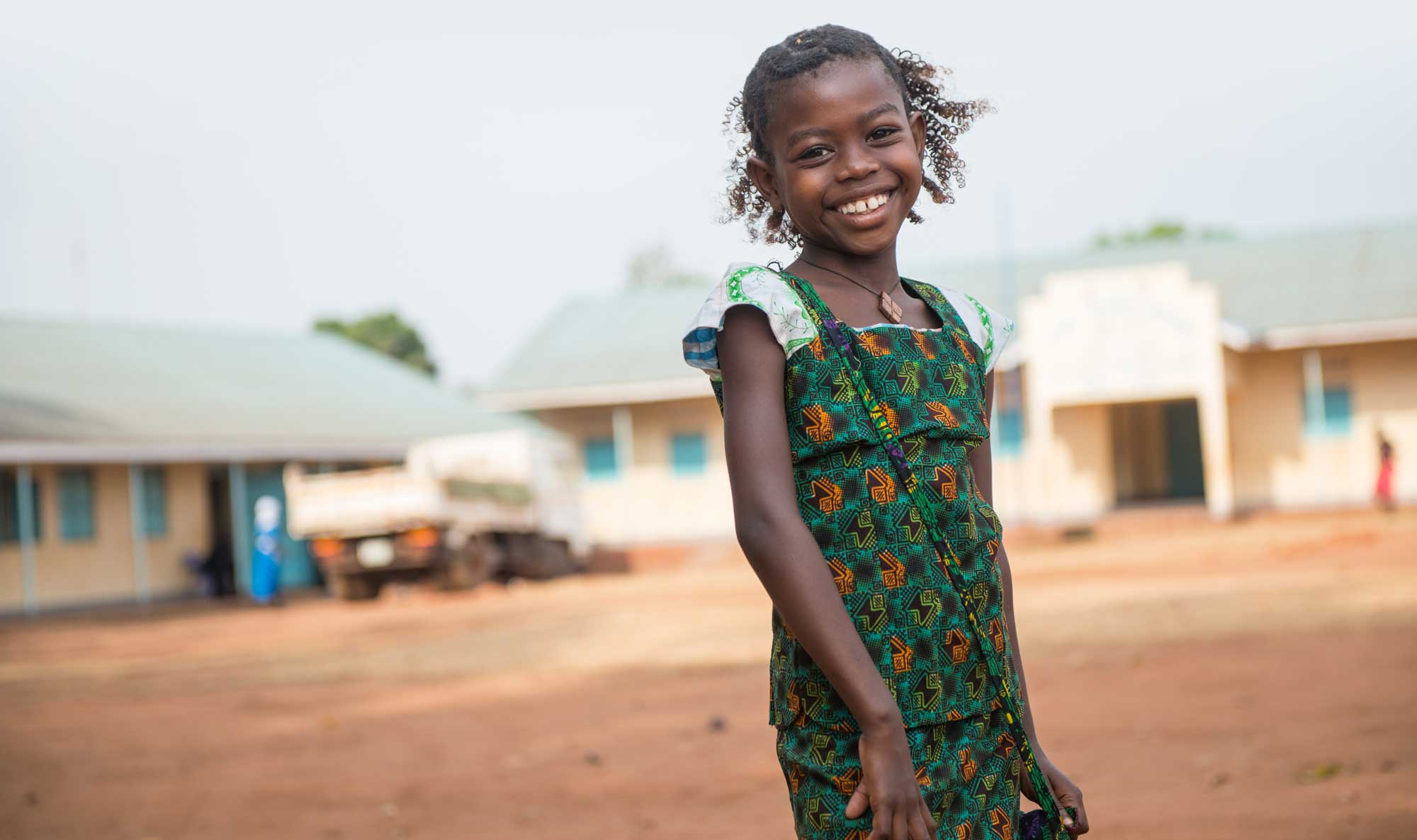