Have you ever been asked to participate in something you knew nothing about?

That’s how it was for many of the people God has raised up to join him in reaching local minority language groups in Indonesia through translated Scriptures. They received an invitation to something unknown, but they felt his leading and obeyed.

Each of them made a choice to step out in faith. As a result God has helped them find community with each other while deepening their relationship with him. Today he’s weaving their individual stories together to become part of his greater story — reaching Indonesia’s minority language groups with his Word.

Here’s how some of them came to be part of the team. 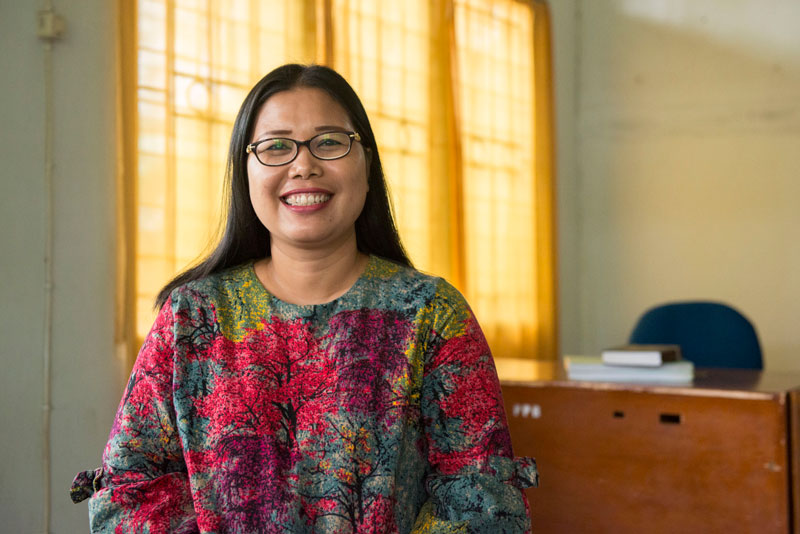 When Ayu Suwandi came to the translation center in Manado 16 years ago, she didn’t know much about Bible translation.

Ron Whisler, a translation advisor with Wycliffe USA, called her up to see if she’d be interested in working at the office. At the time Ayu didn’t even know about Wycliffe, or that Ron and his wife, Jacqui, had uprooted their family from the United States to move to Indonesia and do translation work with Wycliffe. (Ron actually spoke Manado Malay so well over the phone, Ayu initially thought he was Indonesian.)

“I thought of myself as a finance person and an office manager,” she recalled. “I didn’t really think of myself as getting involved in Bible translation.

“I had just graduated from college, and I had a lot of options and offers to get other work that was maybe even better paying work at the time. I took this job because … even though I didn’t understand Bible translation completely, I knew it was some kind of important work, and people had been praying for this.”

When she joined the translation program, she met other members of the team like Pastor Yanti Karundeng, Yuli Sapulette, Jemmy Rompis and Linda Golioth. They became like a family, working together, spending time together, and occasionally arguing over some aspect of the translation work but always coming back together with respect for one another. 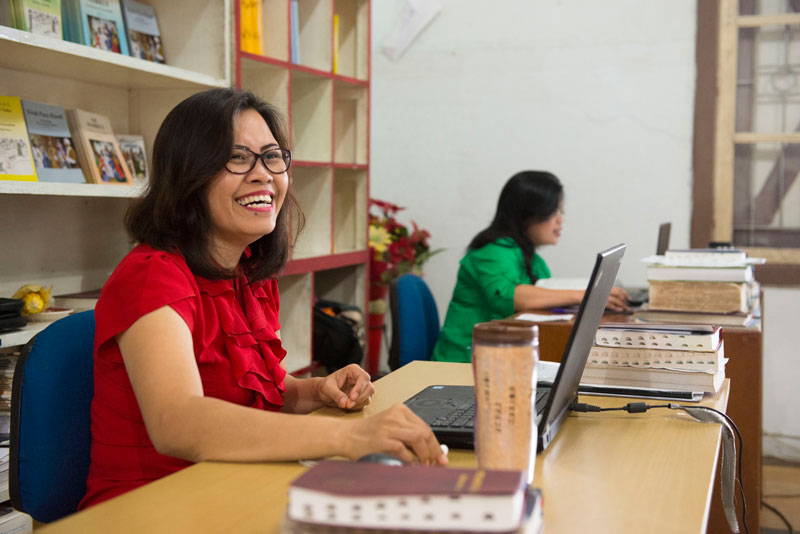 By 2006 Ayu had a great handle on her responsibilities, just as Ron and his family were heading back to the States on furlough. Ron was looking for someone to help pick up the slack while he was gone and told Ayu she’d be a good fit.

“I began to have an expanded vision of why we would do Bible translation and the need, the necessity of it. I began to grow in that area,” she said. “It was a special time for me to see what God was doing in Indonesia through Bible translation. When Ron and Jacqui had to go home, I began to see that we needed to carry more of the responsibility of the work of Bible translation.”

By 2010 Ron told Ayu she was ready to be the leader of the translation program in Manado.

“I didn’t really understand how Ron was choosing me out of all the people. At first I said, ‘No, I can’t do that. That’s too much for me,’” Ayu remembers. “Our first child was five years old, and we were planning to have a second child. I just didn’t think it was the right time.”

But her husband, Franky, said yes, that he believed in her. Franky and Ron agreed that if Ayu wanted the job, they’d all find a way to make it work. “I felt that was the answer from the Lord,” Ayu said quietly, through tears. “So I would no longer reject this responsibility.” 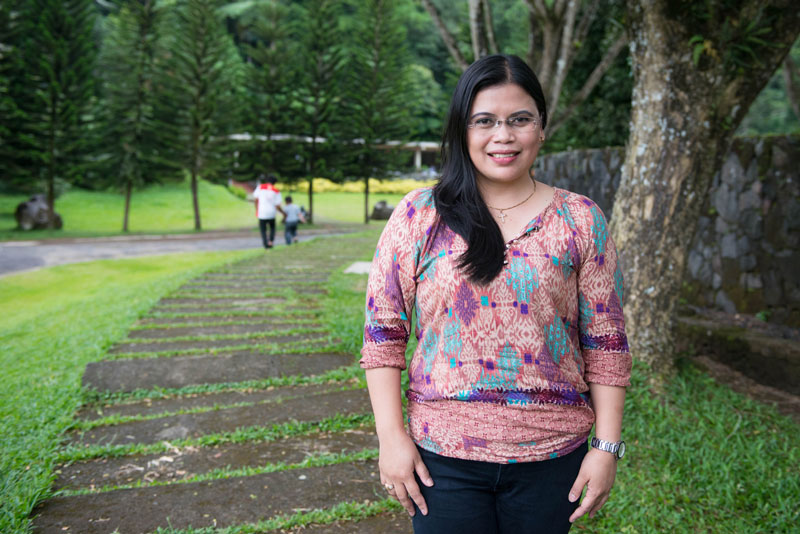 “When I first started working … I was called a Christian. But I didn’t really know who Jesus is,” said Yuli Sapulette, a translator on the Manado Malay team.

“When my parents divorced, I felt that I had no meaning in life,” she recalled. “But when the Lord called me to come and work at the translation center, he helped me understand that I have meaning. I began to understand Jesus loved me when I began translating and putting it into my language.”

One of the aspects of translation Yuli enjoys most is researching terms and figuring out how to make them flow naturally in the Manado language.

“I feel the Manado Malay translation is very important, first of all for me, because it has had a big impact on my life,” she stressed. “When I first read the translation in the Manado language, I felt like the Lord was speaking directly to my heart. I came to realize that what I have experienced — knowing God in a closer way and having meaning in my life — now I want others to experience.”

A Change of Heart 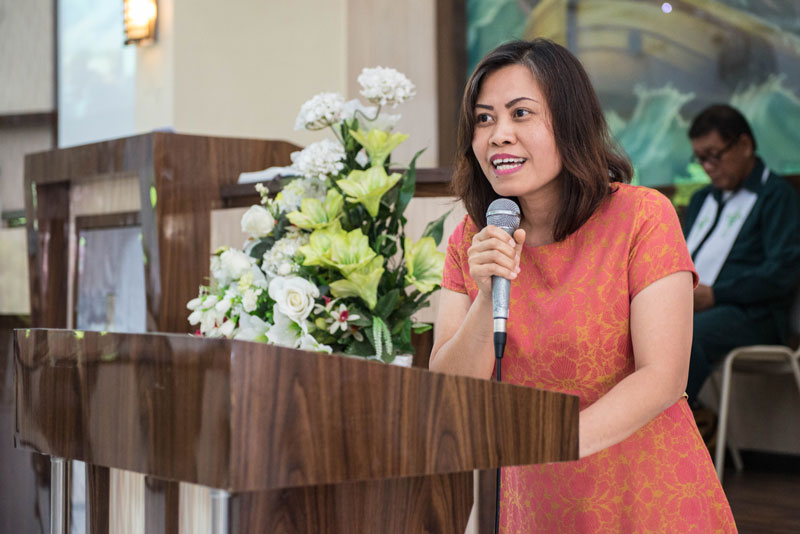 She met Ron when she showed up to preach at his daughter’s birthday party, a common practice when believers have parties in Indonesia. When Ron offered for her to join the team, she initially turned him down before reconsidering.

“I didn’t realize how the Lord was going to work in my heart and change my way of thinking about this,” Yanti said. “The very first time I had a computer in front me … and I could see on the screen all these Bible versions and helps, God was speaking to me at that time in a special way. Now I realize how important it is, and I can’t be separated from this work.”

Yanti also recalled that, although they didn’t know each other before joining the team together, the teammates now consider themselves family.

“We’re brothers and sisters. We always support each other, we always pray for each other,” Yanti said. 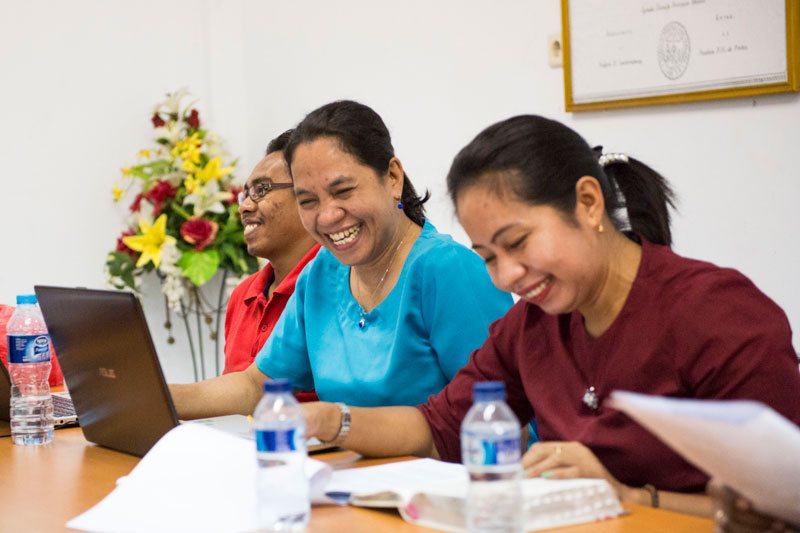 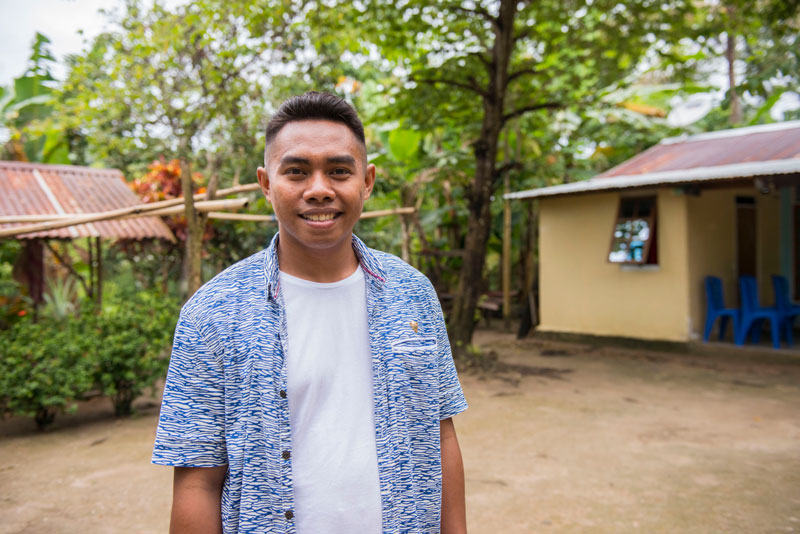 A common issue among the team members is pressure they receive from well-intended family members who want them to have prestigious, well-paying jobs with pensions and a sense of security. Bible translation isn’t especially lucrative in that way, so some of the translators work a second job to help cover the gap.

Ocha Hitalessy, a translator on the Ambonese Malay team, has felt pressure from her family to leave the translation work so that she can get married and settle down. But God himself revealed her life’s plan.

“Before I joined the Ambonese translation team, the Lord had already spoken to me in a dream,” she remembers. “The Lord told me to wake up and get my Bible. He said, ‘Ocha, you are to translate this Bible into your own language.’

“The motivation that I feel for this work, at first, it came from the dream God had given me.” Ocha continued, “But later, it was because I felt that God had chosen me to be involved in this work.”

Like Ocha, translator Ampi Huwae has also had to deal with concerns voiced by others. But he has resolved to follow God’s leading.

“I want to be obedient to God and what he wants for me. What is most important is that I know how God wants to use my life, and I allow him to use it in accordance with his will,” he said. “Whatever God wants, I’m ready to do it. That’s what’s most important.” 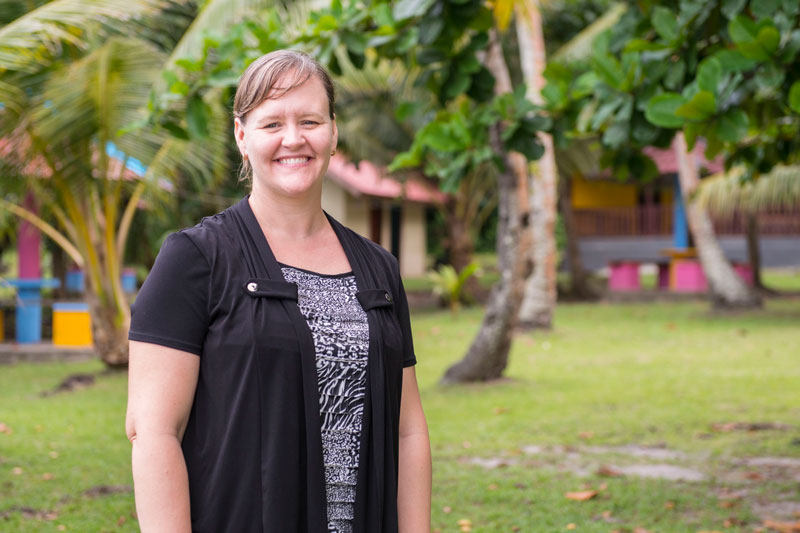 Stephanie Richards and her husband, Jon, came to Ambon Island in Indonesia 11 years ago. Their son, Nathan, was just three months old at the time.

“Sometimes living in Ambon is challenging — creating meals, coming up with the things we need for day-to-day living,” Stephanie said. “My greatest challenge is probably the same as many other working moms: managing my time.”

Now that Nathan is 11, Stephanie splits her time between homeschooling him and leading the Ambonese Malay translation team. Jon also has a full-time role as Wycliffe USA’s eastern Indonesia partnership facilitator.

Though it can be difficult to balance home life, ministry life and their personal wellness, Stephanie says she wouldn’t change a thing.

“I learn so much from [the team] and I care deeply for them. I really can’t imagine doing anything else,” she said. “It’s really a dream job. If anyone likes to do Bible study, I get to spend my whole day considering what God’s Word means and talking about it with others. I really love that!”

The translators on her team share Stephanie’s passion for the work.

“Oftentimes translators come to us because they’re looking for a job,” she said. “But they end up staying because it has become a passion; it’s become a calling.

“Translation is really taxing work. It’s hard to sit at the computer for long hours; it can be exhausting. It’s been incredible to see their commitment to the translation. Each member of the team really wants to see the New Testament completed and dedicated. They’re committed to seeing that happen.” 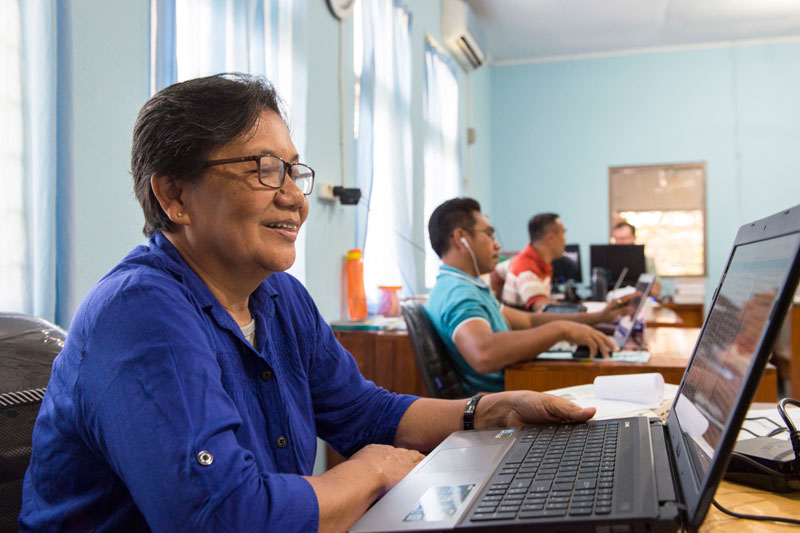 The Ambonese translators’ commitment to the work reminds Stephanie that this is the calling of all believers — to seek his will no matter the cost.

“I know there are people in America who … praise missionaries. They put us up on a pedestal. They think we’re some kind of superheroes, but the truth is, we’re just followers of Christ,” she said. “We’re feeling our way through this, living in obedience to Christ and trusting him.

“I wonder, ‘Why me? Am I really the right person for the job?’ Sometimes I really feel I’m not. But I trust that he has me here for a purpose, and there’s something that I bring. We’re all members of the body of Christ, and he does give us different gifts and abilities, and puts us in different places at different times according to his will. We depend on that.”

Our Role in His Story 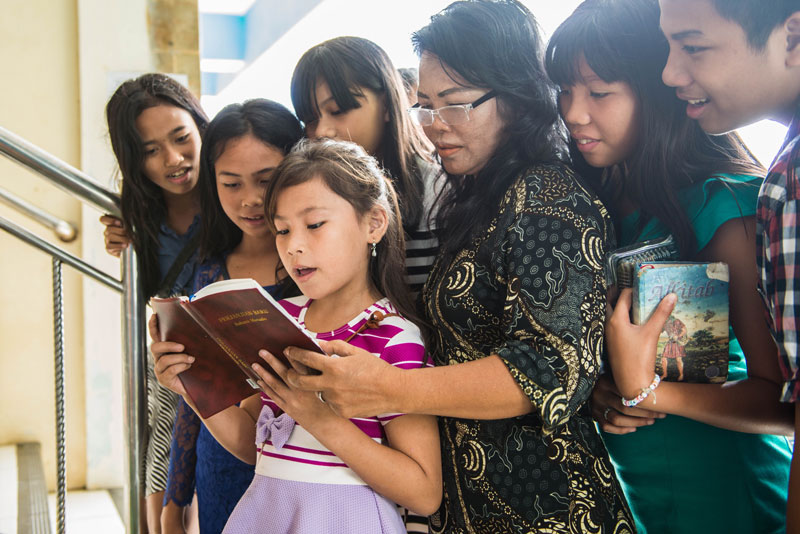 Serving in God’s global mission is a calling, and you never know who might be called — or when.

Whether God is calling you to join us in Bible translation or he’s leading you to serve him for another purpose, you have a specific role to play in his story.

Today both the Manado Malay and Ambonese Malay teams are sharing God’s Word with their communities in languages they can clearly understand.

Join a worldwide community of believers to pray for people and translation projects!